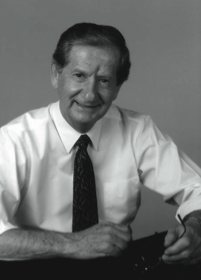 At the heart of the Value of the Person is the legacy and life of its founder, Wayne T. Alderson, a man who changed the culture of one foundry in Glassport, PA. He was a simple man who lived a life rooted in courage, proving that one person can make a difference. Through his personal commitment to bringing love, dignity and respect into the work world, countless of workplaces have changed for good. A movement for peace, hope and change began as the culture of one foundry in a small town in Western Pennsylvania transformed.

Wayne T. Alderson led the charge to change the workplace one person, one company at a time. His story, captured in Stronger Than Steel, Theory-R Management and the documentary film, Miracle of Pittron, serves as a testimonial to a great man who was brave enough to go out on the point for what he believed in and never let his pain keep him from his purpose.  Wayne is a  World War II hero, Bronze Star, Purple Heart and Silver Star recipient.

Wayne founded Value of the Person along with his daughter Nancy Jean McDonnell and together they crossed the country with their message of hope and change.

Click here to order your personal copies of Stronger Than Steel  and Theory-R Management.